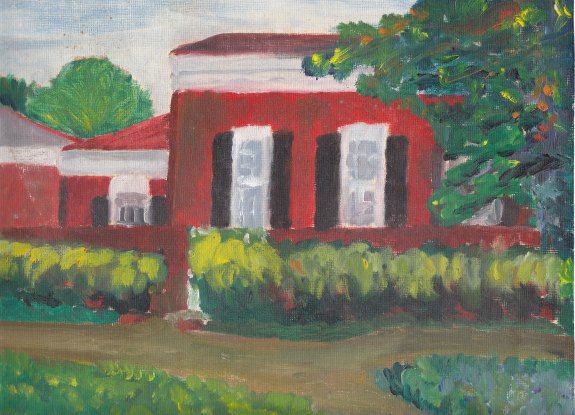 I am a registered architect with a specialty in historical architectural design and consulting. The defined Federal Standards term is “Historical Architect”. I have over three decades of experience in historical structure assessments, design, retrofit and rehabilitation projects nationwide. Buildings range in age from 1760 eastern shore Maryland, to postwar modern structures, to new construction referencing period style (including modern).

Question #2: What era of architectural designs do you find yourself most drawn to?

Which eras would be more appropriate, and for different reasons. I am specifically drawn to periods when design and construction furthered the development of architectural rhetoric, construction practice, and/or advance in design of built form. Roughly listed chronologically, they include at least:

Question #3: What differences do you see in those designs and those of modern structures?

Predominantly the structural system/s employed, and the complexity of building infrastructure and programmatic requirements. Technology which was nonexistent even within the last twenty years may now be of profound importance (e.g., building management systems, energy-focused materiel, and data delivery methods); alternatively currently “new” design parameters such as environmentally responsible, “sustainable” design concepts were part of the codified Roman master planning concepts as they extended the built form of their empire.

Still, architectural design and building technologies reflect and adapt to the form of the culture in which they rise. Some “modern” structures may be old in concept or execution; designs from any “older” era may in fact be revolutionary in their use of forms, materials, and aesthetic expression.

Question #4: What differences do you see in the designs of modern day compared to those of pre-World War two?

The reflection of the state of society as a mirror of cultural ideology. “Modern” design is presumed to mean of the immediate recent years. I believe modern tends to be either exaggeratedly symbolic (as in the “branding” of a person- e.g. Frank Gehry’s signature fluid style), or representational of an imagined complexity of form resulting from program (as in any number of latter-era deconstructivist styled buildings).

Pre WWII structures I perceive as more fundamental in their expression of a program or identity. They are more linear and obvious in their meaning by association. Often they employed abstracted neoclassicism (e.g. the Pentagon in Washington) to convey gravity and permanence, and their exterior design overruled any possible expression of interior programmatic use or experience. Post- WWII structures moved away from this abstraction to a purer expression of form, paradoxically in line more with the “Vers Une Architecture” Five Principles concept first formalized in 1926 by the French Architect and Polemicist Le Corbusier. Expression of the interior program spaces (even if only representationally) directly on the exterior is a device frequently used in the recent past.

Question #5: Are the changes between generations of architecture for better or for worse?

Inevitably change is viewed as a positive. A danger of a closed, non-evolutionally system would presumably lead to a directionless and ultimately dead society and culture. Changes in architecture over time are generally perceived to be a furthering of expression of the prevailing mood of an era, and even the opportunity for constructing at all.

Better or worse is of course relative, and depends on the perspective of viewpoint. Positive impressions, such as the postwar (WWII) boom, frame the generally positive beliefs of an era. Alternatively, depression years of the early thirties in the United States generally are reflected in the lack of opportunity for design and construction due to lack of clients and financial resources. Still the latter half of the 1930’s and federally funded programs such as the WPA and the CCC led to significant cultural and aesthetic development of this otherwise previously despondent era.

Question #6: Do modern or historic structure designs seem more reliable in your perspective?

Innovation tends to be more problematic, as any design or detail on the “cutting edge” tends to be exploratory in nature. Because FL Wright’s roof designs and structural expressive cantilevered terraces ultimately required substantial correction does not mean the Fallingwater house in Pennsylvania was a failure due to not being reliable.  Advancement of architectural design thought or detail depends on experimentation. Modern buildings of the 1920-1950 era often invented details, and the testing grounds were the structures themselves. Examples such as the curtain wall (steel frame and glass paneled exterior walls, “skins” independent of the structural frame and floors) at the Lever House on Park Avenue in New York City proved in forty years’ time that the design was not as reliable as more traditional exterior walls. Even so, technological advances in waterproofing, insulation, glazing, and adhesives and sealants have revolutionalized maintenance and repairs of structures from any era.

Reliability in image and meaning is different from performance factors, and cannot be discounted from analysis of a success of a building in satisfying subliminal expectations.

Question #7: In your opinion, what are the reasons behind such changes?

I perceive that society is a reflection of the architecture that surrounds it. As a society changes, so does the architectural definition. This becomes complex as one evaluates the identity of a culture and the purposes of maintaining built form as a function of collective memory.

Newer cultures (such as the desire in post-war America to level many older downtowns in order to expedite a new automotive-defined culture for highways and parking lots) usually lead to a quest for a reinvention of a built identity. (Note also revolutionary era Soviet Union, and the desanctification of churches, reused as Community centers.) Older, more established cultures tend to limit the remaking of their associated built forms. This would have more to do with respect for order of a society and the environment, and the collective identity that draws from it.

Question #8: Do public opinions state anything different than your private views?

I would imagine, and hope that they do.

One measure of public opinion, or taste in style, would be in various assessments that I have read over the years by professional “Realtors”. Surveys and time on market results suggest residences designed in a modern, or contemporary, style are unilaterally less popular than traditionally styled homes. Pejorative assessments such as “cold” versus “homey” lead to one thought that an acquired taste is often necessary for accepting the truly revolutionary style in modern design. I personally think it all comes down to how successfully a structure blends in an environment, and that such design transcends mere style alone. The more I’ve studied and visited the works of Frank Lloyd Wright, the more I believe that he got it more right than others have.

“In the name of God, Amen. We, whose names are underwritten, the Loyal Subjects of our dread Sovereign Lord, King James, by the Grace of God, of England, France and Ireland, King, Defender of the Faith, e&. Having undertaken for the Glory of God, and Advancement of the Christian Faith, and the Honour of our King and Country, a voyage to plant the first colony in the northern parts of Virginia; do by these presents, solemnly and mutually in the Presence of God and one of another, covenant and combine ourselves together into a civil Body Politick, for our better Ordering and Preservation, and Furtherance of the Ends aforesaid; And by Virtue hereof to enact, constitute, and frame, such just and equal Laws, Ordinances, Acts, Constitutions and Offices, from time to time, as shall be thought most meet and convenient for the General good of the Colony; unto which we promise all due submission and obedience. In Witness whereof we have hereunto subscribed our names at Cape Cod the eleventh of November, in the Reign of our Sovereign Lord, King James of England, France and Ireland, the eighteenth, and of Scotland the fifty-fourth. Anno Domini, 1620.”

Legal note: There followed the signatures of 41 of the 102 passengers, 37 of whom were Separatists fleeing religious persecution in Europe. This compact established the first basis in the new world for written laws. Half of the colony failed to survive the first winter, but the remainder lived on and prospered. 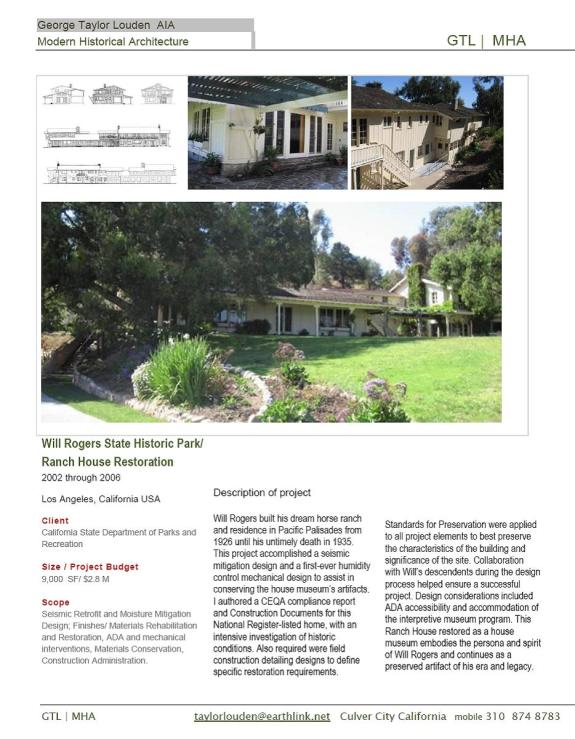 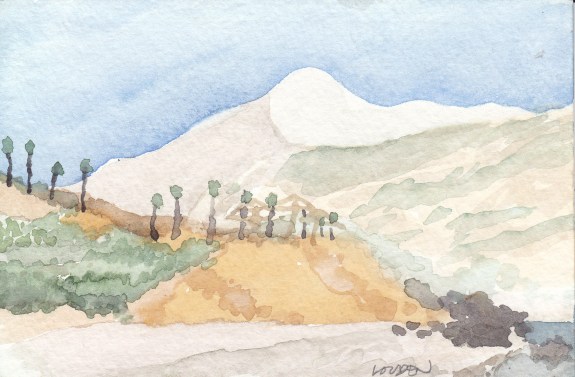 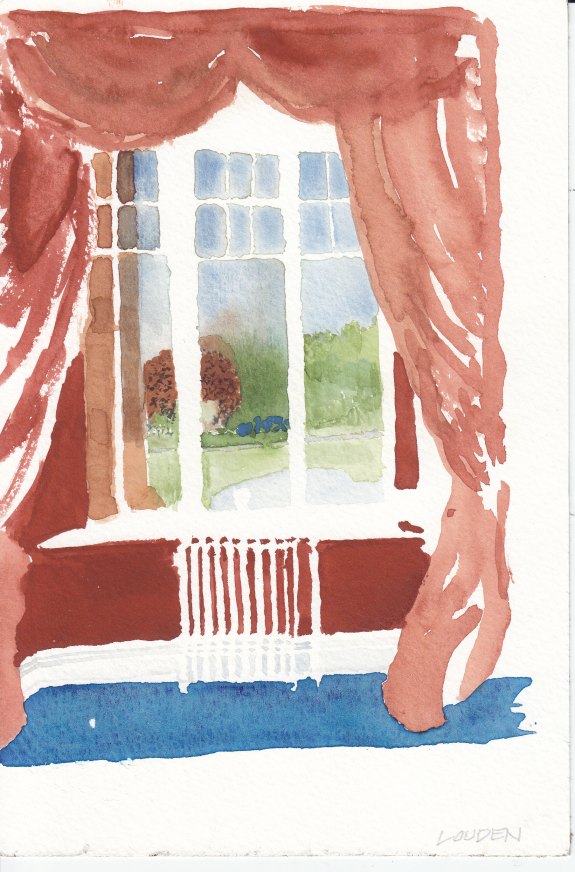 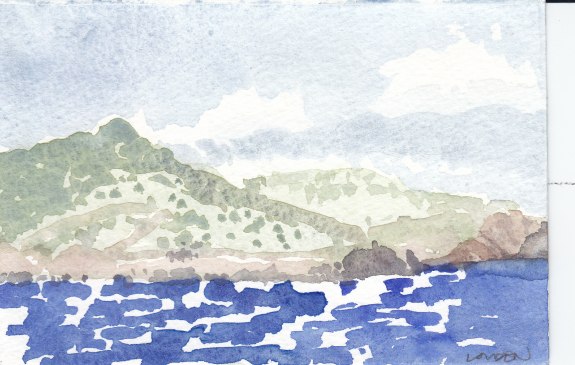 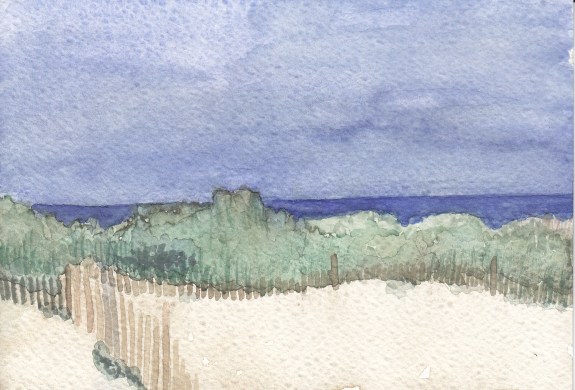 Thomas Jefferson and his school of infinite vista 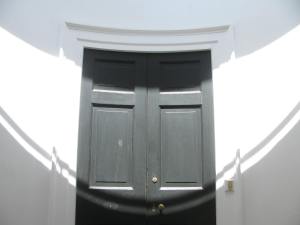 Pavilion IX, photographed after 11 AM in June. Design attributed to Latrobe, this is the most atypical of the ten Pavilions.